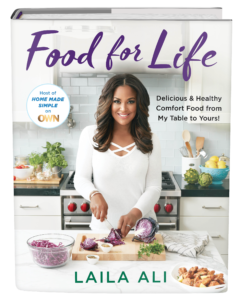 Laila Ali is a world-class athlete, fitness & wellness advocate, TV host, home chef, founder of the Laila Ali Lifestyle Brand, and mother of two. The youngest daughter of late beloved global icon and humanitarian, Muhammad Ali, she is a two-time hall of famer and four-time undefeated boxing world champion, whose stellar record includes 24 wins (21 of which were “knockouts”) and zero losses. Laila is heralded as the most successful female in the history of women’s boxing. In 2012 when women’s boxing was included in the Olympics for the first time in history, Laila was the first woman in history to provide expert commentary for NBC Sports.

Laila is the host of OWN Emmy award-winning series, “Home Made Simple” and the author of the best-selling cookbook, “Food For Life: Delicious & Healthy Comfort Food From My Table To Yours!” A major source of the inspiration for Laila writing this particular cookbook was her desire to show people how they could enjoy healthier and more nutritious versions of their favorite foods without having to compromise taste.

Ignited by her passion for an active lifestyle and wanting to share this with her millions of supporters, Laila created her own lifestyle blog LailaAliLifestyle.com where she regularly shared her personal workout regimens, recipes, DIY ideas, family tips, and so much more! Laila is also the three-time host of the televised ESPN Sports Humanitarian Awards. Laila recently launched YouPlenish, a nutrition supplements brand along with her very own line of organic seasonings, Laila Ali Spice Blends.

Laila has been an outspoken voice and regular contributor for the CBS Sports Network’s new all- female sports commentary program, “We Need to Talk,” the first of its kind in the history of sports broadcasting. For multiple seasons she hosted “Everyday Health” airing in national syndication on ABC, in addition to being the previous co-host of “American Gladiators” and former host of “All-In With Laila Ali,” which aired in weekend syndication on CBS.

Laila is a past President of the Women’s Sports Foundation, a non-profit organization that is supported by many of the biggest athletes in the world. Through the WSF Laila promotes equality for women in the world of professional sports, and is an advocate for programs that encourage young women to be confident, healthy and strong through sports. Laila was a major voice for the 40th anniversary of Title IX, which protects women’s rights to be included and treated equally in collegiate sports. Always eager to encourage others to live an active lifestyle, Laila Ali was the 2012 “Mombassador” for the Aquaphor New York City Triathlon, a competition she actually participated in and completed impressively in a little more than 3 hours. Laila has also appeared as a guest-star on popular fitness shows, “Biggest Loser” and “The Revolution.”

Laila tickled America’s funny bone with multiple hilarious roles as Kevin Hart’s boxing nemesis on the hit comedic series, “Real Husbands of Hollywood.” In 2014 she made her feature film-acting debut as the co-star of the action movie, “Falcon Rising,” opposite martial arts star, Michael Jai White. Never one to turn down a good challenge, she captured the hearts of millions and made it to the final round of the fourth season of ABC’s “Dancing with the Stars” in 2007.

A recognizable and trusted figure whose name and likeness packs a powerful punch, Laila has been an endorser for major brands such Subway, Kohl’s, Dannon’s Activia and most recently, TJMAXX. Carefully building a successful branding and licensing empire, (a former owner and operator of a successful nail salon in southern California) Laila successfully launched a signature line of hair styling tools with Hot Tools, a brand subsidiary of hair care powerhouse, Helen of Troy.

With philanthropy at her core, Laila is a major supporter of charitable organizations such as Feeding America, Children’s Hospital and Peace 4 Kids. Laila is extremely proud of the work she has done on behalf of the American Dental Association to create oral health awareness for children and she is equally proud to be an ongoing supporter and partner with the American Heart Association. This partnership supports Laila’s belief in being heart healthy and assists in the facilitation of much needed awareness about heart disease and strokes in communities most affected by these illnesses.

Laila is a sought after inspirational speaker and author. She has keynoted speaking events at Harvard University, North Carolina A&T and has spoken to thousands of executives at leadership conferences for multi-billion dollar corporate brands around the world. Her life’s story is chronicled in a dynamic book for young women entitled “Reach!” which has just been re-released to the public. 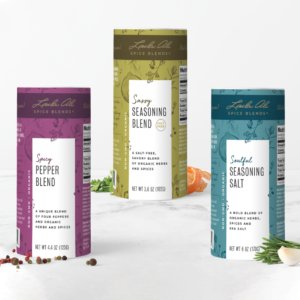