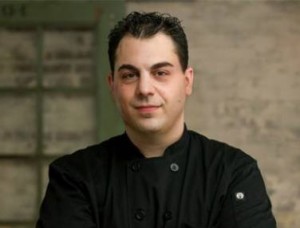 Chef Thomas Perone, a Brooklyn native through and through “Cooks from the Heart”. Growing up in restaurants Thomas worked from the age of 14 at restaurants in Bensonhurst, Coney Island, and Bay Ridge. He was first exposed to two types of cuisine, Italian and Greek. Being of Italian and Argentinean descent a love for Mediterranean food has always been in his passion.

In 2004 Thomas turn his dream into reality by attending the Institute of Culinary Education. From that point on, Thomas' cooking flourish in Global cuisines ranging from European, Mediterranean to Latin America, which is a natural representation of Brooklyn’s ethnic offering. Thomas' progression as a chef was happening very quickly, being covered and documented by major networks and publications. Thomas is the Proud Owner of Brooklyn Roots an Umbrella for three concepts, Pig Guy NYC (Eclectic BBQ), Thomas' Greek Kitchen (Fast Casual Greek Cuisine), and MK Burger.