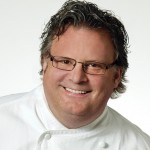 Blurring the lines between chef, artist, entrepreneur and inventor, David Burke is one of the leading pioneers in American cooking today. Â His fascination with ingredients and the art of the meal has fueled a career marked by creativity, critical acclaim and the introduction of revolutionary products and cooking techniques.

AccoladesÂ
Burkeâ€™s mastery of French culinary technique was confirmed when, at age 26, he won Franceâ€™s coveted Meilleurs Ouvriers de France Diplome dâ€™Honneur for unparalleled skill and creativity with his native cuisine. Additionally, Burke has been honored with Japanâ€™s Nippon Award of Excellence, the Robert Mondavi Award of Excellence and the CIAâ€™s August Escoffier Award. Â Nationâ€™s Restaurant News named Burke one of the 50 Top R&D Culinarians, and Time Out New York honored him as the â€śBest Culinary Pranksterâ€ť in 2003. In May 2009, Burke was inducted into the â€śWhoâ€™s Who of Food & Beverage in Americaâ€ť by the James Beard Foundation. Â In the same month, he also won the distinctive, Menu Masters award from Nationâ€™s Restaurant News as one of the nationâ€™s most celebrated innovators. Star Chefs, the magazine for culinary insiders, awarded Chef Burke with the â€śContribution to American Cuisine Awardâ€ť at the 2009 Star Chefs Congress.

Celebrity Chef
Burke trained at the Culinary Institute of America, and soon thereafter, he traveled to France where he spent several stages with notable chefs such as Pierre Troisgros, Georges Blanc and Gaston Lenotre. Burke returned to the U.S. as a sous chef for Waldy Malouf at Le Cremaillere and then for Charlie Palmer at River CafĂ© where he ascended to Executive Chef and earned three stars from The New York Times. In 1992, Burke opened the Park Avenue CafĂ© with Smith & Wollensky CEO Alan Stillman, and then, in 1996, he became Vice President of Culinary Development for the Smith & Wollensky Restaurant Group.

Entrepreneur
In 2003, Burke opened davidburke & Donatella, now known as David Burke Townhouse, on New Yorkâ€™s Upper East Side, followed by David Burke at Bloomingdaleâ€™s, a dual concept restaurant offering both a full service â€śBurke Bar CafĂ©â€ť and a â€śBurke in the Boxâ€ť take-out and eat-in concept, which he expanded to Las Vegasâ€™ McCarran Airport in November 2008. Burke also opened up David Burkeâ€™s Primehouse in The James Chicago Hotel. Burkeâ€™s restaurant collection continued to grow when he purchased Fromagerie, a fine dining restaurant in Rumson, New Jersey, where his culinary career began under founders Markus and Hubert Peter. David Burke Prime opened at Foxwoods Casino & Resort in July 2008 and Fishtail by David Burke, opened in December 2008 in New York. Most recently, he opened David Burke Kitchen in The James New York in SoHo, bringing his signature whimsical style to downtown New York.

Inventor
During his tenure at the River CafĂ©, Burke began experimenting with interesting ingredients and cooking techniques. His first culinary innovations, Pastrami Salmonâ„˘ (now available through Perona Farms), and flavored oils revolutionized gastronomic technique. During his 12-year period at the Park Avenue CafĂ©, Burke created GourmetPopsâ„˘, ready-to-serve cocktail lollipops. Never one for slowing down, Burke continued to develop creative culinary products including easy Flavor-Transfer Spice Sheets and Flavorsprays, both designed to eliminate fat while keeping the flavor. Additionally, Burke is actively involved with culinology, an approach to food that blends the culinary arts and food technology.

Philanthropist
Burke supports numerous charities and community groups, including the American Cancer Society, City Harvest, City Meals on Wheels, March of Dimes, the Charles Lafitte Foundation and the Foodbank of Monmouth and Ocean Counties, based in his native state of New Jersey. Â He has also served as a board member of Share our Strength and is currently on the board of Table to Table, a food rescue program in northern New Jersey.