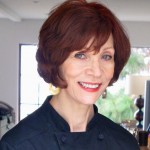 Fran Costigan, the â€śQueen of Vegan Desserts,â€ť is internationally recognized as the go-to authority on vegan pastry arts. Franâ€™s training and work as a pastry chef in both traditional and vegan kitchens give her a broad perspective on pastry for all diets, and her modern, sophisticated, unapologetically delicious confections are favored by all dessert lovers, whether vegan, omnivore, or somewhere in between.

Fran has been teaching her popular vegan dessert classes in New York City at the Natural Gourmet Institute and the Institute of Culinary Education for over 20 years. And, as a popular speaker, she presents workshops and cooking demonstrations at schools, conferences and events across the United States, Canada and in Europe. Her bestselling cookbook, More Great Good Dairy-Free Desserts Naturally, is designed as a complete course in the art of vegan desserts, and became the basis for Fran Costiganâ€™s Vegan Baking Boot Camp IntensiveÂ®, a certificate course for both home bakers and professionals. Franâ€™s highly anticipated new book, Irresistible Chocolate Vegan Desserts for Everyone: Unapologetically Delicious, Decadent and Dark, Organic and Fair, will be published by Running Press, fall 2013.

Franâ€™s work has been featured in The New Yorker, VegNews, CafĂ© Sweets, Japan, Yoga Journal, and Organic Spa. She baked her celebrated "Chocolate Cake to Live For" on Discovery Health TV and her "Organic Vegan Twinkies" were featured on Better TV and ABC's Nightline. Â She is an advisory board member of the New York Coalition for Healthy School Foods, and a professional member of the New York Womenâ€™s Culinary Alliance, Women Chefs and Restaurateurs and the International Association of Culinary Professionals.