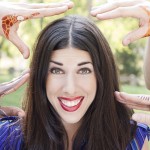 Her destiny became obvious to Joanie Leeds' parents when, at the tender age of two, Joanie grabbed a band mic at a party and belted out the entire song "Tomorrow" from Annie. Jaws dropped! No one could remember ever hearing a big voice like that coming from one so ti

As a musical theatre major at Syracuse University, Joanie began composing her own songs. After graduation, she did the New York City thing, bartending at The Bitter End when not onstage performing. While making the rounds as a singer/songwriter in New York clubs (her favorites were The Bitter End, The Living Room, Arlene's Grocery and CBGB's), Joanie tried her hand at about ten different day gigs until a friend suggested that she get a job where she could sing with kids during the day and perhaps sleep at night. You could say that Joanie found (as in "discovered") herself, managing one of the Manhattan Gymboree locations and singing with and for kids all day long. The nocturnal club scene was fun, but making music with children was real fun

Life clicked into place when Joanie realized that when she was with children, they transformed themselves into amazing creatures of joy, forgetting how to hold back. Seeing the kids get in touch with their true selves gave Joanie a sense of fulfillment that far surpassed playing for adults on the club circuit.

The songs that Joanie Leeds began turning out reflected this sense that life is a joyful adventure. Entertaining at birthday parties and pre- schools soon progressed into concert performances nationwide and generated material for four full length CDs: City Kid, Challah, Challah, I'm a Rock Star, and Joanieâ€™s new release, What a Zoo! Joanie's has also released a full length DVD, City Kid Live. She is currently working on a children's book, while maintaining a busy teaching and performance schedule.