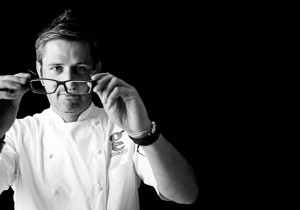 Merlin Verrier was raised in the central coast of California, where seasonality is seen in its purest form and quality ingredients are always the focus.  His West Coast vibe and passion for music, combined with his playfulness and humility, fit in perfectly with the culinary vision of Chef Graham Elliot.

Merlin received his culinary education from the Western Culinary Institute in Oregon, which was followed by almost a decade of experience working in numerous restaurants across Colorado.  He served as an executive chef at the historic bed and breakfast, The Wellington Inn, located in Breckenridge, followed by another executive chef position at St. Bernard.  Next, Verrier worked alongside Chefs Max Macissock and Carl Kelin at Great Northern Tavern.  In 2004, he shifted his focus and gained important experience as food and beverage director at The Holiday Inn in Frisco.  He honed his skills in a managerial position, grossing over $1.5 million through room service, bar and restaurant sales during his year-long stint there.

From there Verrier returned to the kitchen, assuming a sous chef position at Jennifer Jasinski’s award-winning restaurant, Rioja, in Denver.  From there, he moved to corporate chef at Modern Mexican, Chef Richard Sandoval’s acclaimed restaurant group. At Modern Mexican, Verrier was responsible for opening all new restaurants, new hires, creating seasonal menus and overseeing special events.

Finally, Merlin came to work with Chef Elliot in Chicago, helping launch his first solo project, Graham Elliot, in 2008.  Since then, Verrier has consistently been Graham’s right-hand man, serving as the executive chef of Graham Elliot and assisting in opening the sandwich concept, Grahamwich, as well as Graham Elliot Bistro. Under Merlin’s tenure, Graham Elliot received one Michelin star in both the 2011 and 2012 Chicago guides.

Merlin then served as corporate chef and director of operations for all of Chef Elliot’s restaurants, before opening the group’s newest project in Greenwich, CT, Primary Food + Drink, in December 2013.  Merlin is currently Executive Chef/Managing Partner at Primary, overseeing the design, menu and day-to-day operations.  He resides in Greenwich with his family.