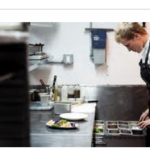 Since the age of 16, Ben has worked for some of the world's highest acclaimed chefs including Gordon Ramsay, Raymond Blank, and Rick Stein in their restaurants in New York and England. In 2008, Ben founded Silkstone with friend and business partner, Philip Winser, which has become one of the city's leading creative events agencies, developing luxury brands throughout the United States using innovative event design, marketing campaigns, and digital strategy. He then created The Fat Radish restaurant in New York City in 2010, serving a menu best described as elevated home cooking using local seasonal vegetables, and sustainably sourced proteins. He opened Silkstone's second restaurant, Ruschmeyer's in Montauk in 2011, focusing on simple local seafood and recently his third the Leadbelly, and oyster bar on the lower east side. He is a passionate advocate about using local, seasonal organic produce, and using food as a healing tool.