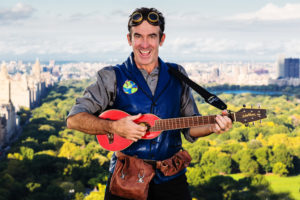 FunikiJam: music classes, live shows, and parties for newborn & up
Lifelong artist and educator, Brian Barrentine is the creator, voice, and face of FunikiJam World Music - winner of the 2016 Parent’s Choice Award for Best Music. Barrentine has been cast in numerous musicals on Broadway and Off; played Elvis in “Elvis the Musical” European Tour; written by the Gymboree Music Program; served as Early Childhood Directory at Brooklyn Conservatory; and acted in national commercials and TV shows like The Good Wife, Madam Secretary, Law and Order SVU, and the Perfect Murder. When he is not on stage or in the recording studio, he enjoys teaching at NYU, singing jazz and traveling.

Live Show Synopsis:
#1 event for kids, Time Out NY! The guitar-wielding Captain Jam and his live band of musicians, storytellers and dancers take the stage and invite the audience to join a musical adventure around the globe - even giving children the chance to come up on stage, play a drum solo, or sing in a microphone. By the end of the show, imagination, live music, colorful costumes, and lots of audience interaction have helped Captain Jam complete the three-part FunikiJam mission - to have fun, to jam, and to learn about the world.